Dooring laws are laws that require people in a vehicle to open their door with a degree of care for moving traffic. A typical dooring law requires that a person opening a vehicle door ensure that it is reasonably safe to open the door, that opening the door will not interfere with moving traffic, and that the door is not open for any more time than necessary.

Why should you care?

Dooring laws provide a relatively clear rule to assign responsibility to what some people might see as an unavoidable accident – an opened door hitting or being hit by passing traffic. These laws put the responsibility for opening vehicle doors on the person opening the door, rather than the people passing their vehicle. They provide a clear incentive for people to look for oncoming traffic – whether bikes, cars, or pedestrians – before opening their door. Without this type of law, bicyclists and other people in traffic have to show that they could not avoid an opening or opened door in order to recover for injuries caused by the open door.

“Dooring” collisions are likely one of the more common bicyclist-vehicle collision types, particularly in urban areas. Between 2010 and 2012, data from the City of Chicago showed dooring crashes making up between 7.3 and 19.7% of reported bicycle crashes. The Boston Cyclist Safety Report published in 2013 found that dooring crashes made up between 7 and 13% of all bicycle collisions in Boston between 2009 and 2012. Naturalistic studies, which rely on audio, video, and telemetric data recorded about a bicyclist’s journey, point toward dooring threats being common as an Australian study found that unexpectedly opened vehicle doors accounted for 17.6% of bicyclist driver interactions.

However, more data on dooring would be appreciated, as an example, North Carolina, which done a lot of work to crash-type its bicycle crashes, reports that only a handful of dooring crashes have been recorded each year from 2002 to 2012, for 20 total in that decade. A similar study from Wisconsin using the same crash-typing methodology found similarly low numbers of dooring crashes.

The prevalence of dooring crashes shows the need for dooring laws and public safety campaigns that promote them. In New York City, the LOOK! Campaign has served to remind people in vehicles to look before exiting, especially before opening cab doors. Chicago has adopted a similar campaign and recently raised fines for persons who open doors without looking. The Model Minimum Uniform Crash Criteria, promoted by the National Highway Traffic Safety Administration, Governors Highway Safety Administration and USDOT for law enforcement documentation of motor vehicle crashes, do not appear to include data elements that capture dooring.

Some bicycling-related laws and bicycle infrastructure can contribute to dooring risks:

Forty states have a dooring law. The ten states without a dooring law are: Connecticut, Indiana, Iowa, Kentucky, Michigan, New Jersey, North Carolina, Tennessee, Virginia, and West Virginia. In thirty-eight states the dooring law applies to people leaving their door open longer than necessary to load or unload a passenger or cargo, as well as when a door is opened without caution. 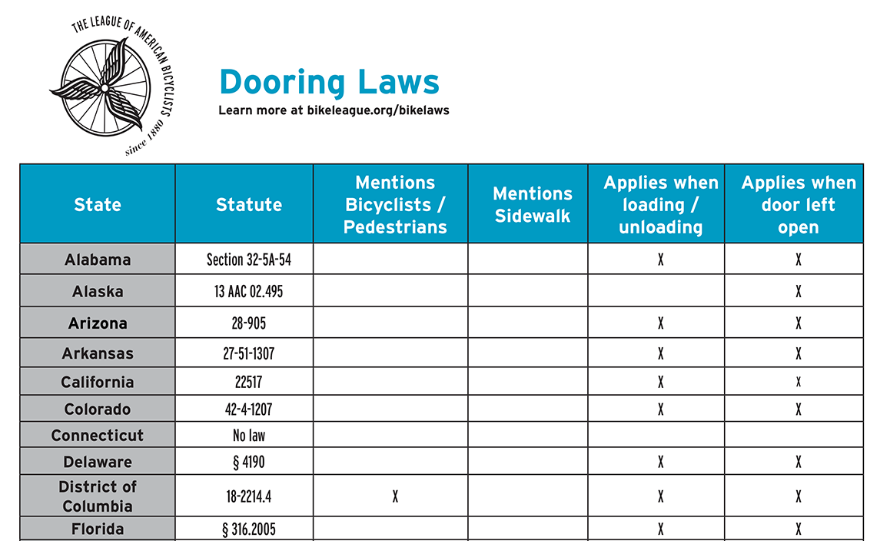 Click here to view how your state stacks up

In addition to doing a great job of making sure that bicyclists and pedestrians are protected by its law, Rhode Island’s law reflects the most modern formulation of the UVC provision on dooring. This means that it applies to both sides of a vehicle and that it applies when doors are left open.