We’re more than midway through 2021 which means more than half of state legislatures have concluded their legislative sessions – and about a dozen states have had recently passed laws come into effect. It is a great time to reflect on trends in bike laws and what to look for in 2022.

In 2021, we saw four major trends in bike-related laws that might point toward future changes:

E-bikes continue to be legalized and the 3-class system continues to be the preferred framework of state legislatures.

Safe passing laws continue to be introduced and adopted.

As of 2021, only 11 states have not adopted a safe passing law with a defined distance (including Oregon and Rhode Island who do not define their distance in feet). 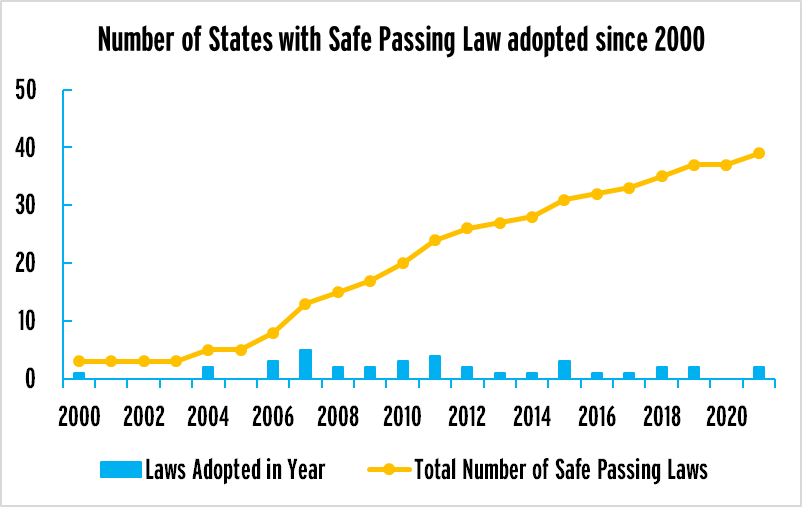 Many recent safe passing laws feature elements from our model safe passing law, including requirements that drivers change lanes to pass if an adjacent lane is available, and allowing drivers to cross double-yellow centerlines if safe in order to provide space to a person bicycling. Some of these features are being added through bills independently where a state already has a safe passing law. Our Safe Passing Law table has been updated to better showcase these features.

Somewhat troubling, we are also seeing more states restrict the application of their safe passing law by exempting drivers overtaking people in a bike lane or on a shoulder.

Vulnerable Road User laws might deserve some re-examination and discussion.

So far, the National Transportation Safety Board’s call for mandatory helmet laws for all people biking have not led to restrictive laws for people biking.

In 2021, both New York and Vermont considered mandatory bicycle helmet laws. New York’s would have raised the age for requiring helmet use in their current law from 14 to 18. Vermont’s would have created a new law for people under 16 years of age.

Since 2012, the League has maintained resources on many bicycle-related traffic laws on our Bike Law University and State Bike Laws pages. Even though we’ve dropped the E of Enforcement from our Bicycle Friendly America program, traffic laws provide important rules of the road for bicycle safety and driver education; they are the basis for civil justice when people are injured, killed, or have their property damaged while bicycling; and they are the basis for criminal justice after a crash. Even if a safe passing law is not proactively enforced – and in practice they rarely are – it can be a crucial part of education, civil liability, and criminal punishment when someone hits a bicyclist.

Building a Bicycle Friendly America for Everyone will require a commitment to traffic safety that goes beyond recognizing the responsibility of individual drivers for their actions and holds the elected officials, policymakers, planners, designers, and engineers of roadways responsible for creating safe bicycle networks. Bike-related laws are an important expression of the rights of people who bike, the duties owed to them, and the duties they owe to people they share the road with, but relying on perfect behavior for traffic safety is why the US currently has the worst traffic safety record among high-income countries. The League will always protect a person on a bike’s right to the road and we will continue to advocate for building safe systems that enable everyone, of all ages and abilities, to safely and easily choose to go places by bike.